Skip to content
As the water temps push 50-degrees on the surface, smallmouth bass are starting to move from their deepwater winter haunts to pre-spawn locations anywhere from 5-feet around rock piles to 15-feet off ledges and points. 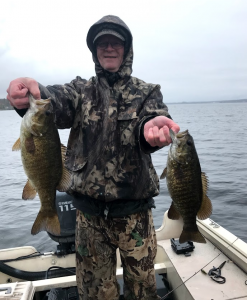 These fish will start feeding aggressively in preparation for spawning season next month, but they are still a little sluggish this time of year.   A great way to cover ground and catch them is by slowly twitching stick baits like an original floating Rapala around structure until you find where they are staging.  When the water is this cold, fishing it slowly with a sporadic twitching motion seems to draw the most strikes.   On Saturday I found a pile of smallmouth on a rockpile.  There had to be about 20 of them and they all looked the same.  I caught 4 on 4 consecutive casts using a copper/black Rapala before they caught on and it took about 10 casts to catch 3 more.  But they wanted that bait presented very slow.  I could see them swimming around it and nudging the bait before striking.  Once again, I wish I had my Go-Pro with me, but of course, I didn’t.
Northern Pike are shallow right now too and they are hovering around the mouths of streams and around channels where there’s moving water.  If you can find an old weed bed near a channel or stream, so much the better.  Pike are a lot like smallmouth this time of year – so fish slow.  It’s a great time for fly fishermen to target northern pike using big 3/0 deceivers and clousers or “bunny flies” in red/white, chartreuse/black, or black leach patterns.  For conventional tackle, give large husky jerks or 6-inch plastic swimbaits a try along with traditional red/white spoons.  I love using Williams Lures for pike.  The Trophy I is a heavy lure that gets down there and fishes slow and the 4-inch Warbler is an awesome lure that has a LOT of action.  You can fish it almost at a standstill and it still “warbles”.

The quality of the lures is as good as it gets.  A good tip for fishing the weedless Johnson Silver Minnow (another classic spoon) is to run a plastic curly tail grub off the back – it adds amazing action to the lure, makes it easy to change colors, and definitely helps catch more pike.