Welcome back to another fun filled year of playing in the Belgrade Lakes Region.   As I sit here typing away, my mind is full of daydreams and wonders what adventures are in store this summer.  I wonder what giant fish will be caught this year and by whom.  It’s always hard to predict but brown trout is definitely a species that will produce a few monsters this summer, and of course there will be lots of giant pike caught too.  I wonder if the state record pike will be caught this year.  It’s certainly possible someone will catch one bigger than the current 31.2 pound record.  That record has stood since 1998.  Rumor has it that the black crappie record was broken this past winter on one of the Belgrade Lakes.  That’s not surprising because crappie numbers are exploding along with white and yellow perch.  The ice fishing for white perch this winter was the best we’ve ever experienced, so get the chowder pots ready because the perch fishing is going to be awesome this spring. 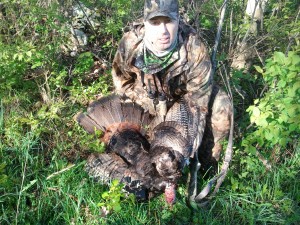 Wild turkeys and smallmouth bass have been dominating the local outdoor scene during the last few weeks.  Turkey hunters have reported seeing birds on a daily basis and the birds are decoying and coming to call with regularity.   As the season winds down (the last day is June 1), hunters will see more bachelor groups of mature Toms together.  The later part of the season can be difficult because the birds are educated, but this is a great time of year to find the biggest Toms.  On one of our successful hunts this spring, Darrell had four jakes come into our decoy spread.   I was doing the calling and he was set up in a blind overlooking the back end of a field.  I called the birds into the decoys, but Darrell couldn’t shoot because the birds were so close together.  They put on quite a show, gobbling like crazy and fighting with the decoy and each other.   Finally they separated enough and one shot later it was time to fire up the grill.  Darrell was fortunate this year because he got two birds on back to back trips.  The State of Maine allows hunters to purchase a bonus turkey tag so you can take two male birds in the spring. 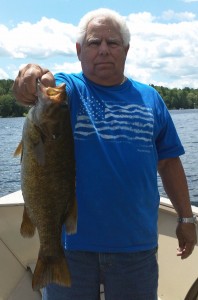 In addition to the sweet sound of gobbling birds and falling asleep to a chorus of singing peepers, there’s one more sure sign of spring – bedded smallmouth bass!  The smallies started making their nests about 3 weeks ago, which is a little bit earlier than usual.   The water warmed up quickly because we had very little rain in late April and early May.  It’s so much fun watching the bass work their nests and protect them from predators like bluegills and crayfish.  We’ve been catching quite a few female bass off the deeper sides of the beds and for the most part we try and leave the bedded fish alone (although it’s hard to pass up sight fishing for bedded smallies).  One fun way to catch bedded fish is on a fly rod rigged with a small popper.  Because this is visual fishing, it’s great practice for a beginner and a fun way to shake off the winter rust for avid fly casters.   During this time of year, it’s vital that anglers diligently practice catch and release and put the bass back on their beds to protect the future of the fishery.  This is a stressful time of year for the bass and they need us to be as gentle as possible.  It’s important that we try not to drop the fish on the deck of the boat and try to avoid “over-fighting” the fish.  Have fun catching them, but try and get them back into the water in a timely manner so the fish doesn’t get too stressed out.

As another season begins, don’t forget to send in your photos and I’ll try and get them in the paper.  We all love seeing those big fish!  I’m really hoping to find some time to perch fish this week.  I have a craving for a fish fry!  Tight lines.