It’s 3:45am and I am already in my turkey blind. I decided after a wild-turkey chase yesterday that I was going to pick this spot and stay in it till noon if necessary. I know eventually the turkeys would pass by here because it is a natural funnel between the ranch where the turkeys have been feeding and a pasture that the turkeys seem to end up in every day around 10:00am. After my unsuccessful outing yesterday I made some improvements to my “natural blind” that would enable me to shift positions if necessary. I threw a few windfalls and some broken branches on the blind which would provide really nice natural cover. I also remembered to bring a sleeping pad that I could use if I decided to shift from sitting against the tree to a prone position.

I can barely see. It is still very dark. The only sounds are those of frogs, crickets, and other creatures of the night. Despite their noise it is very peaceful and I am soaking up the moment. On my way in this morning I set up a single female decoy that is about twenty yards from my blind. I came in sans light so that there would be no possibility of being detected. All of the rain this spring has worked to my advantage as the ground is very soft and thus quiet.

On the opposite side of the ranch are my two hunting partners for the morning. Our strategy was for us to be on north and south ends of the ranch and hopefully the birds would come to one of our positions. If the birds get hung up in the middle they will start to work their way towards my end of the ranch to see if they can motivate the birds to move along a little quicker.

I am nodding off. I declined to use my iPod which I brought along today in case I was sitting for the entire morning. I am just enjoying the early morning sounds. I am jolted to erect consciousness by the first gobble of the morning. It is from an end of the ranch where one of the turkeys has been roosting all week. He is responded to by a turkey from a completely new roosting area. They gobble back and forth for a good fifteen minutes. There is nothing from my area at all! I can’t believe it. However I am sticking to my game plan and not relocating. Besides it is only 4:50 and I have heard from two or three toms which means there are still a few unaccounted for. A minute or two later I am rewarded and a tom about forty yards away joins the morning discussion. I assume theses gobbles are locator calls and also a notice to any willing hens that the toms are ready for action. However I’m still pretty new to this game so I really don’t know for sure. 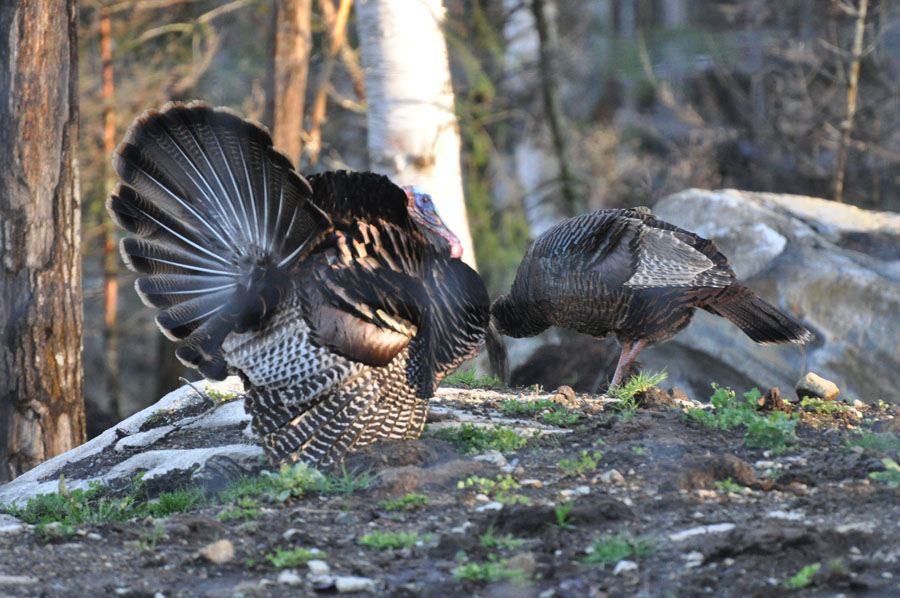 Around 5:15 a hen jumps into the conversation. She is directly behind where I have set up. She is eliciting responses from the toms on the other side of the ranch. I decide this is a good time to chime in and make a few clucks and puts. Not a lot, just enough to get everyone’s attention. Then I go quiet for a while. I hear the flutter of wings and spot two toms on the other side of the ranch fly down from their roosts and presumably are coming my way in response to the hen behind me. I also decide that maybe I should get down in a more concealed prone position. Thank god for the sleeping pad. Meanwhile the hen behind me is talking up a storm. I start to wonder if one of my hunting partners this morning opted for a different location and is the one actually doing all the calling. The calling just doesn’t seem natural. Too much, and very aggressive. I decide to do a few more puts with my slate call and to my surprise a hen flies down over me and lands next to my decoy. Now I am worried she will see me. Fortunately I had moved a few minutes ago.

The hen seems really ticked off at my decoy. She is walking all around it and is quiet vocal. I am thinking this is as good as it gets. I have a talkative live decoy and a three or four toms gobbling to her in response. I am lying so still I think I am going to bust. I have my gun and ready and after ten minutes of this I am starting to experience arm fatigue. However I don’t dare move! The hen has calmed down and now she is just putting and clucking near my decoy. She has no intention of moving away and has no clue that I am less than fifty feet away from her. I am relieved to hear the noise of turkey flight. I am pretty sure one of the toms has jumped the wire fencing and is on his way to meet a new lady friend. I am rewarded about three minutes later when he comes into sight in full display. 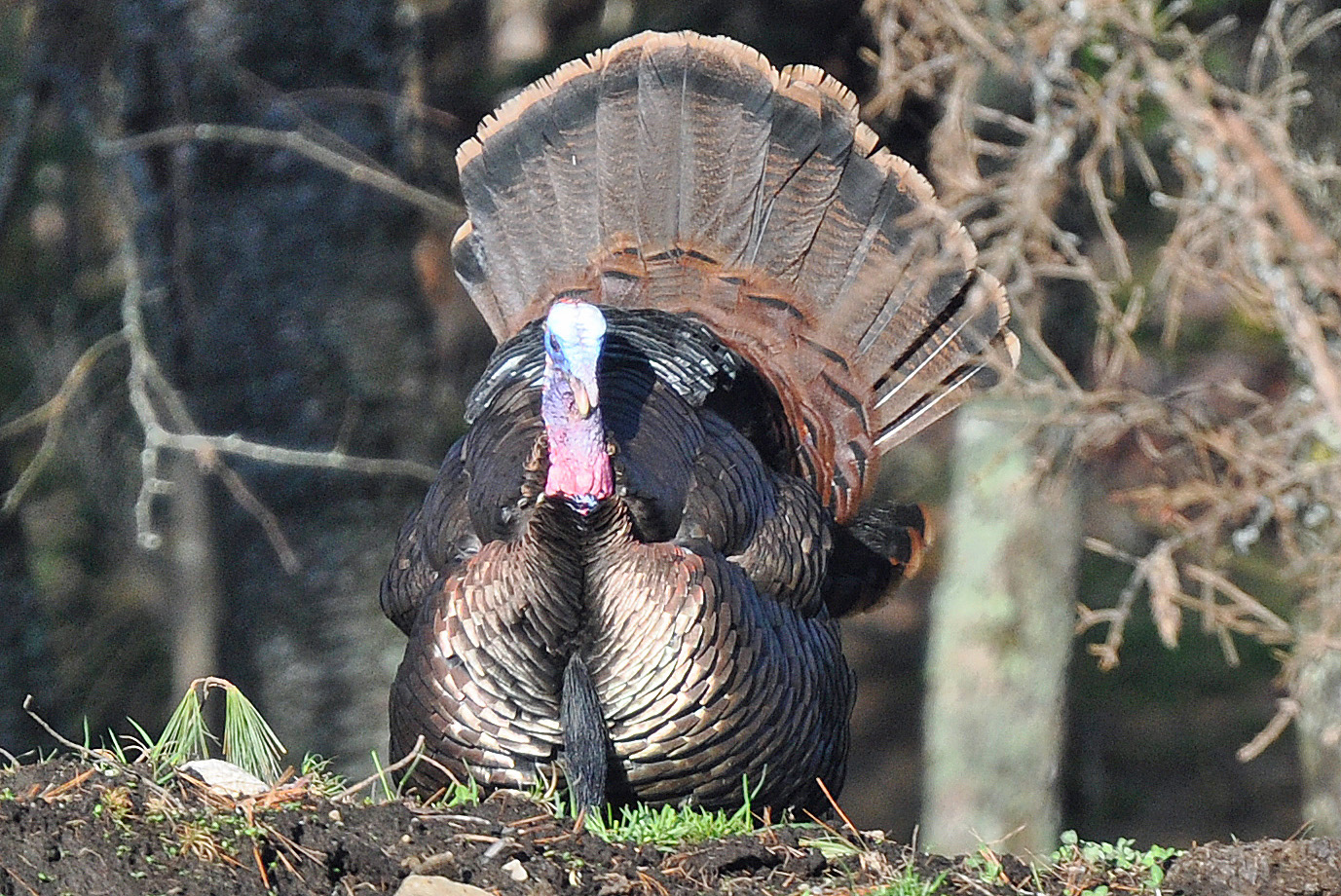 I have the bead on him immediately and size him up. He is not the really big tom that I have seen on the ranch but he is a beautiful bird with a decent beard. I savor the moment and then pull the trigger. He was inside ten yards and he is dead instantly. I roll over and thank the gods for such an incredible experience.

By the time my hunting partners show up I have checked out the bird. He is a real beauty. I am so thankful for the past hour that I just don’t want the moment to end. I think I am aware that this may be the best turkey hunt I will ever experience. It isn’t the biggest bird I have ever shot but the hunt was incredibly exhilarating and maybe the most exciting hunt (of any kind) I have been involved with. Like any animal I harvest I consider the turkey to be a trophy. They are all trophies in their own way and this one is no different. I will remember this hunt for a long time and will give special thanks when we enjoy the fruits of this harvest at the dinner table later this year. To quote Jim Shockey…”WHAT A HUNT!”

The bird weighed in at just over eighteen pounds, with a nine inch beard and ½ inch spurs. I probably could have waited for a larger bird but this bird will do just fine and I am just so happy to have participated in such a hunt. I can’t wait till next year! 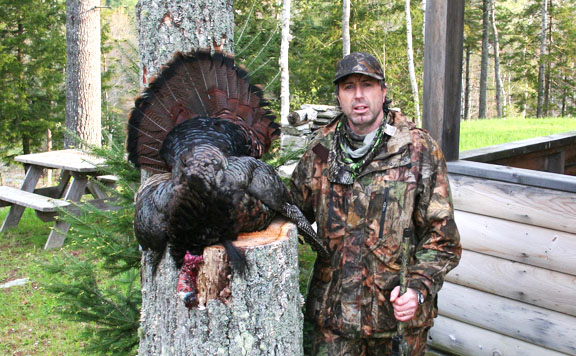