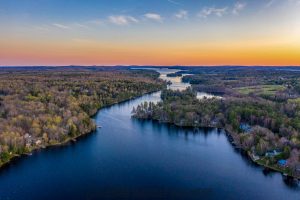 surface temperature was 58 but it rose up over 60-degrees and held onto that temp during the day.   It’s the first time this year we held onto slightly warmer water.  I’m not going swimming yet, but after this long, cold and wet spring it was comforting to know there’s hope for a summer.

The pike fishing was a little odd today but the smallmouth fishing more than made up for it.  The guys caught some pike but they were small ones and the bigger fish that followed didn’t want to cooperate.  The pike caught were on swimbaits and hard stick baits and the bass were on plastic worms rigged both wacky and Texas along with s 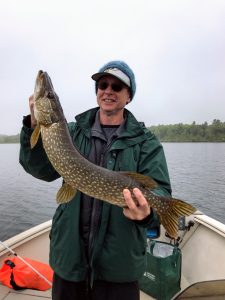 ome jigs and Ned Rigs.  Oddly enough, we only caught one fish in the morning on topwater.    Lots of bass on their beds, although we tried to leave them along for the most part.

I’ve been trolling the Belgrade’s a few evenings this week and the trout are active.  Rainbows in Long Pond, browns in Great Pond and splake in Snow Pond have all been hitting on Mooseleuk Wobblers and DB Smelts.  The next few weeks should be some of the best fishing of the year.